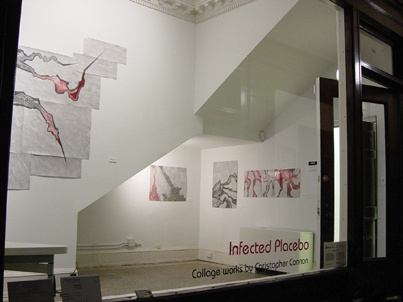 My art addresses issues of deception, corruption, and media manipulation, focusing on the activity of the military industrial entertainment complex. The Infected Root Structures grow from the government’s control and spin of mainstream media outlets such as television and print.

Infection is spread by corruptive personalities, who fabricate and disseminate lies or distorted truths as a means of public distraction. The Roots consist of words and phrases that have been deconstructed and distilled into subtle vibrations of value and texture, thus removing the original meaning from the text.

I have collected and dissected the headlines and selective text that reference consumer products, current events and issues of political scandal to construct the root forms. Prescription drug advertisements stand in the background, disclosing specific, often overlooked possible side effects. The side effects detailed in the warning labels often are more detrimental to the user’s health than the condition the drug is intended to treat.

By dissecting the structure and order of the articles, the words and sentences are de-contextualized and become ambiguous, as they were intended to be in mainstream media. These words and fragmented sentences no longer have contextual continuity, and have transformed into a structure of roots or neural networks which carry an infectious organism -- a syntax error.