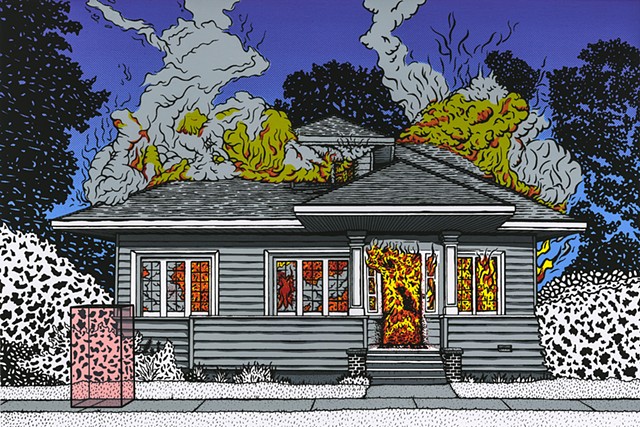 This is the forth print in my "Detroit" series about my memories of growing-up and living in and around Detroit, Michigan.

This image depicts one of the many 'Urban Legends' about Detroit. Devil's Night dates from as early as the 1940s. Traditionally, city youths engaged in a night of mischievous or petty criminal behavior, usually consisting of minor pranks or acts of mild vandalism (such as egging, soaping or waxing windows and doors, leaving rotten vegetables or flaming bags of canine feces on front porch stoops, or toilet papering trees and shrubs) which caused little or no property damage.

However, in the early 1970s, the vandalism escalated to more destructive acts such as arson. This primarily took place in the inner city, but surrounding suburbs were often affected as well.

The crimes became more destructive in Detroit's inner-city neighborhoods, and included hundreds of acts of arson and vandalism every year. The destruction reached a peak in the mid- to late-1980s, with more than 800 fires set in 1984, and 500 to 800 fires in the three days and nights before Halloween in a typical year.